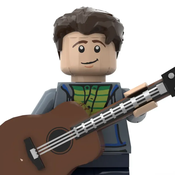 BONZAI!!!
This set is based on The Karate Kid franchise, a beloved film series that lives on today in the hearts of it's fan base. It represents Mr. Miyagi's house where Daniel LaRusso trained for the karate championship in 1984. It is a pivotal location throughout the series, where both sensei and student increase their skills and wisdom as they rub off on one another.
The set itself includes Mr. Miyagi's house and garden, Daniel's 1948 yellow Ford convertible, and four minifigures: Daniel, Miyagi, Johnny, and Kreese. The house has three back walls that can be easily removed (as shown in picture seven) to reveal the interior. Inside Daniel and Miyagi can catch flies with chopsticks or drink tea and discuss life lessons.
The biggest challenge in this set was combining a realistic exterior, with a functioning interior. It took me a few days but I finally found a good common ground and I'm quite satisfied with the result.
The Karate Kid is one of the most remembered and cherished franchises out there. Even today it lives on in fans both young and old through the show Cobra Kai. I built this set because I would love to see these films come to life in Lego form and I believe many others would too. I hope you like it. Wax on, Wax off!
UPDATE: In light of recent events, (other Karate Kid ideas are being submitted lately) I've decided to make a few updates and photo improvements. Including: Ali Mills from a previous update, Johnny's bike, a side window on the right side of the house, and an improved head photo.