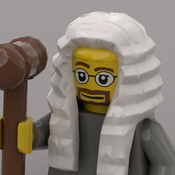 This is Koholint Island (also named Cocolint in some languages) from the game The Legend of Zelda : Link's awakening.
The game was released in 1993 for the Game Boy. It was probably the best game on this console, and for many players, it is also one of the best Zelda games, despite the limitations of the Game Boy. The charming characters, the story, the game design, the dungeons, the music, everything was great. In 2019, a lovely remake was released for the Switch, so new generations can also explore this mysterious island, and realize what will happen when the Wind Fish wakes up.
Contents
For this build, I did not try to represent the island in a precise scale. Instead, I was inspired by some marketing visuals with a minimalist island containing the mount Tamaranch with the Wind Fish egg, Marin's house, and some trees. I made it a bit bigger to include miniatures of important areas of the island : Toronbo shores, mysterious forest, Goponga swamp, Yarna desert, Martha's bay, and Tal Tal mountains. I also added references to the 8 dungeons of the original game.
I could not skip including the Wind Fish in the set, as well as the owl who guides the player in his adventure. So I added them both on a mural, similar to the one displayed in the southern face shrine. Unlike the island, this room is minifig-scale, so I also added Link, Marin, and this annoying skeleton met in Catfish's maw.
The build
The egg mountain is made of a central pillar with an octogonal base, with panels structures clipsed on each face. The base of the island is made of technical pieces and canvas, so it should be solid enough. The sea is also made of several plate layers.
The project was built using BrickLink Studio, as well as Part Designer for the egg and the shield textures. It has 2145 pieces in total.
This set was very fun to build and I am quite happy with the result, I hope you will enjoy it as well !