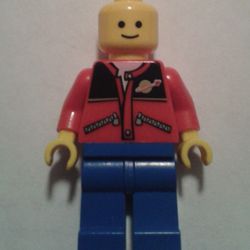 Walt Disney built Disneyland in 1955 as a realization of his dream to have an entertainment venue where the parents could have fun with their kids, since fun fairs were usually made for kids only.  He made the promise that it would never be completed “as long as there is imagination left in the world.”  Since his death in 1966, Disneyland has continued to expand and grow.  While my favorite attraction will always be Pirates of the Caribbean, the new ride I most looked forward to when I was a kid was Star Tours.  Opening on January 9, 1987, the ride marked the second collaboration between George Lucas and Disney (the first being Captain EO in 1986) and quickly became one of Disneyland’s most popular attractions.  In April of 1987 my dad and I spent two hours in line twice to experience the most original utilization of amusement park technology since Walt’s own robot Abraham Lincoln in 1964.  Though the vehicle and the ride have since been redesigned, the model depicted here, the Starspeeder 3000, is the Star Tours ride vehicle as it appeared in Tomorrowland for more than twenty years.

Since I was a kid, the three forms of entertainment I've loved most have been Star Wars, Disneyland, and Lego.  Now that I live 2,000 miles from Disneyland I don’t get to go every week-end anymore, but this project combines all three and is a way to relive the fun and adventure of the first Star Wars-themed ride.  The model, detailed inside and out, is made from 796 pieces, and there are thirty-four labels which add detail.  The minifigures include C-3PO, R2-D2, the pilot droid RX-24 (“Captain Rex from the cockpit”), and a family of four (Dad, Tiffany, Spike, and Mom.)  The cockpit accommodates the pilot droid, and there are twenty seats inside.  For fun, I have included photos of the Starspeeder in the lobby as it appeared opening day, complete with PeopleMover trains.  The PeopleMover was a ride I liked a lot.  After waiting more than two hours to see Star Tours, my friends and I would be tired and weren’t looking forward to another two-hour wait.  So we’d go on the PeopleMover.  It had a short line, meaning an easy wait time, and it was a Disneyland ride, which meant it was something special.  Also included are photos of other Disneyland characters going on the ride.  With 10,000 supporters like you, this could become a Lego set!