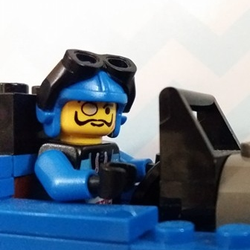 Thunderbird 3 is International Rescue's rocket used for space rescue seen in Supermarianation's cult classic 'Thunderbirds' from 1965. The show is set in the year 2065 where an organisation develops fantastic machines to save those in peril in difficult rescue missions. Thunderbirds has been kept alive and is still capturing the imagination of the current generation in the new series 'Thunderbirds Are Go' which has been on air since 2015.

As in the TV series, the control room is accessed by sitting on a couch that elevates the crew through a tunnel leading from the the base of the rocket all the way to the control room.

The model includes an opening door to access a removable main control room. The control room can seat 2 minifgures.

The minifigures from left to right: