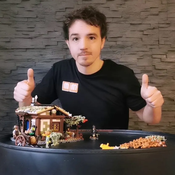 Be welcome - You are invited to join a world of *Nelwyn*, *Daikini*, sorcerers, a two-headed monster and more. The model shows a detailed interpretation of the battle scene at castle Tir Asleen (close of the motion picture from 1988) with about 2,900 bricks used.
It includes the following minifigures, animals and iconic items:
- Willow with magic acorn and Elora Danan as baby, Madmartigan and Sorsha
- Fin Raziel as goat and raven
- The Brownies
- General Kael with 3 Nockmar warriors
- A troll (including troll d*), a skeleton and an Eberisk (A two-headed monster – oh my dear!)
- A rat, some spiders and a horse
- Frozen prisoners (with a little Easter egg for all the castle fans)
"I stole the baby"
The model has four sections:
- castle wall with main gate
- left tower with armoury and prison / right tower with weapons room and ambush
- tree with a pretty axe
"I hate trolls"
Sample of functions:
- separate the sections for greater playground and more playability
- main gate and portcullis that open/close
- hidden (and less hidden) entrances
- flames to set the castle on fire, just like you want to
- barrel defence; spider surprise; crossbow ambush
"You're a great warrior! And a swordsman!"
About me and my incentive: Grown up under the reign of LEGO Knights (Castle) and Pirates and excited about fantasy movies of the 80s and 90s, I have rediscovered my love to LEGO as adult. That's why I decided to create a model, with which today's kid's can grow up like I did. Equally, yesterday’s kids (like me) can tap into the memory of their childhood for nostalgic and magical moments. With this ambition, it was important that both, today's and yesterday's children can find excitement for the set. It should unite playability and the passion for collecting and displaying.
Last main update included following
added iconic items/persons: magic acorn, the brownies, troll d*
improved: Eberisk, General Kael, Willow, Madmartigans armor
changed: some colors, helmets and a few details. Also pictures, now with iconic scenes and better performance of functions. New background.
What’s next? If you like it, please support (an addtional comment would help too).
I’m also thankful for criticism, suggestions and more, so please comment.