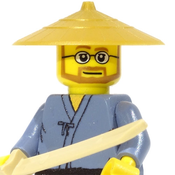 Trico, the allegedly man-eating beast, captured our hearts the moment we first saw it in the adventure game The Last Guardian. Part cat, part dog, part eagle and 100% adorable, this giant creature was instrumental in the survival of a young boy captured in a strange, ruined city.

Standing roughly 25 cm tall and almost cm 30 long (not counting the tail), Trico is mostly to scale with the boy, but the size was actually decided by the part used for the nose: the foot of the Rey action figure! Building on that, Trico was formed around a solid structure, using friction joints in the neck and legs to maintain stability when standing up. The main body was built upside down to provide a smooth underside (important for such a big creature) and also to put antistuds on the back which the boy can grab on to, using the new transparent element.

Trico sits fairly comfortably on an 8x8 surface, but a tower wouldn't be included in this set to keep costs down. I'm certain that it would happily sit on top of most modular buildings or big architectural sets you'd like. The set also comes with a shield that the boy can use to direct and trigger the blasts shooting from Trico's tail (which uses a spring-loaded shooter), and a barrel of yummy goo to feed it.