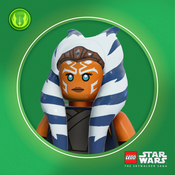 NOTE:  This project is not yet complete.  As I will not have access to LDD for a while, I have decided to post what I have and provide updates later.  While the final details of the project have not yet been hammered out, I do have a mostly complete outline of what the idea will include.

Presenting, for the first time in LEGO form, the Jedi Temple!  This large and faithful model of the majestic structure contains details for display and rooms for recreating crucial scenes from Star Wars: Episodes I-III and The Clone Wars!

The Jedi Temple is an integral location in the Star Wars universe.  It is featured in the prequel trilogy and the Clone Wars TV series.  Every Star Wars fan should agree that LEGO must release a set depicting the Jedi Temple.  I have been working on this project for a very long time, trying to get it just right.  So far, I have only completed the exterior and the basic structure, and I have a few rooms well on their way.  It wasn't easy deciding what to include, and there are still some elements on which I am undecided.  I do know that the scope of this project is similar to that of 10188 Death Star from 2008.  Each update will focus on a completed aspect of the temple and a relevant set of minifigures .  For now, I will describe the basics.

I built the model on two dark gray 32x32 baseplates.  For the color scheme, I chose light stone gray (off-white) and reddish-brown.  Light stone gray is a rare color that has been used predominantly in Mindstorms NXT.  That being said, if LEGO chooses to produce this set, they may decide to use another color, but I think off-white is the most accurate.

For the statues on the steps of the temple, I used the Emperor Palpatine hologram pieces from last year's Imperial Star Destroyer in dark tan.  The lower ziggurat contains detailing fairly accurate to the source images I used, but it was difficult due to the scale of the model.  The main ziggurat was even more difficult.  At first, I used 4x6 plates with angles on either side, but they didn't appear steep enough.  So, I used 3x6 angled plates, which are closer, but a little bit too steep.  Then, I struggled to find an angling mechanism that didn't leave a large gap at the corners.  I finally succeeded by connecting the sides to the floor using 3-length technic beams.

The vertical stripes on the "block" sections are brown plates and tiles attached using SNOT techniques to give them a small inset.  To accommodate the top edges of the ziggurat, the light gray edges at the top are upside-down wall elements attached by clips.  The four secondary spires are 2x2x11 columns with translucent brown nose cones on top.  The primary spire is supposed to be wider at the base, but there is no way to achieve that effect at this scale using current LEGO elements.  The three vanes at the top are achieved using a four-prong torch piece and angled flag pieces.

I will post updates whenever I complete a new section of the temple.  Until then, please support my project!  If you have any suggestions on addition rooms or characters you would like to see, let me know in your comments!  And please check out my other projects:  Yoda's Jedi Interceptor https://ideas.lego.com/projects/102117 and Battle of Dathomir https://ideas.lego.com/projects/104427!