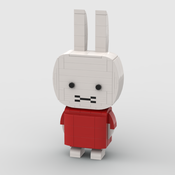 By Scarfizzle
9 comments
In this project I've recreated the iconic album cover of Californication by the Red Hot Chili Peppers. It's still the most successful album of the band. Next to that it was one of my first albums I owned when it came out in 1999. In that time I was discovering music on MTV as a 12 year old kid. Now more than 20 years later I still like the songs and artwork of the album (where the water is in the sky and the sky is in the pool). So I've took on the challenge and try to recreate it with Lego.
The main display piece of the set is a 3D variant of the album cover. Of course the pool with the sky is visible in the model but also details like the rose garden, wooden terraces, white chair and green frog statue are represented. Next to that the set includes a minifig display in the shape of the bands logo for the 4 minifigures: Anthony, Flea, Chad and John. The total piece count of the set is 1399.
For the most parts of the pool, the sky & water mosaic I've used the SNOT technique. Recreating the sky and water in mosaic was quite hassle, but you'll get the idea and I think it looks pretty cool. I've used 4 custom tiles for the album title and the bands name. With the songs of Californication on the background it was fun to build. I think it's a great set for music and vinyl fans who can build it while listening to great music. What do you guys think of it?
If you like the Peppers or you think this set is awesome: hit the "support" button and help me to bring this project to 10.000 supporters!
Thanks for your help!
If the Peppers aren't your cup of tea. Check out my other Ideas project Miffy (the cute little Dutch bunny).