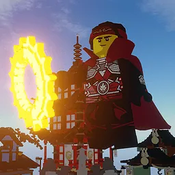 By PyrokineticNinjaMaster
24 comments
This is Project Technological Recolonization Economic Enterprise - or T.R.E.E. for short.
The Emerald Knights have left their planet for the second time and have established a base on a large, but atmosphere-less, rocky moon. For the last decade they've been setting up camp, so to speak, and expanding their station. Because of the low mass of Niart their building has not been hampered by  - oh, what was it called? Oh yeah - gravity.
However, in recent exploration, a spaceship has found a giant Firebug!
Thinking in the moment, they rushed back to base, unwittingly leading the bug straight to the colony! Now the defence of the Emerald Knights will be put to the ultimate test as the nearly indestructible jaw of the bug crashes down on their edifices.
I built this as a complement to my Spectron storyline. (https://ideas.lego.com/projects/d2db89ad-1130-4cef-a74e-f42541c32fdb) I'd greatly appreciate it if you support that too!
This has all been built in real life and is stable enough to stand. (In fact, it still stands 2-3 months after the original competition that I entered it in.)
If you like my builds, check out my profile!
Thanks, and please support, rate, comment (constructively, of course,), and share!
Pyro (pronounced Fyro)