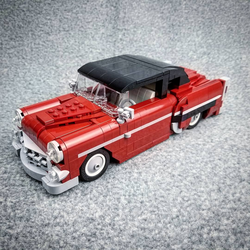 Ready to grace your collections in the same scale as the recently released Saturn V set (1:110) is the SpaceX Falcon 9 rocket! Falcon 9 is a two-stage rocket designed and manufactured by Elon Musk's SpaceX for the reliable and safe transport of satellites and the Dragon spacecraft into orbit. Falcon 9 is the first orbital class rocket capable of reflight and is an historic new step in humanities quest to explore the solar system! Re-create your own missions with this feature rich recreation.

No Lego rocket collection is complete without the latest in cutting edge rocket development!