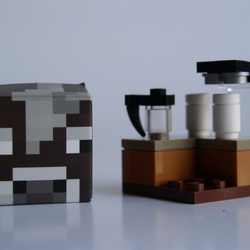 This project I have created is based off the mosasaurus and it's tank seen in Jurassic World. Unfortunately, Lego did not release a Mosasaurus tank, so I made my own. Both seating areas rest on technic bricks. These can be moved, allowing the seating areas to lower into the aquarium section, just like in the movie. On the edge of the tank are railings, as well as the cable used to feed sharks to the Mosasaurus. There is a variety of rocks and plants on the bottom of the tank. The microscale Mosasaurus has moveable fins and lots of detail. I have also included a photo of the Mosasaurus lunging at my custom I-rex.

I hope you like this project! Be sure to support!