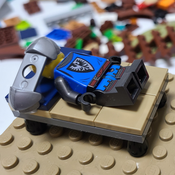 Castle Concept Starbucks (Medieval Cafeteria)
Hello, I'm Uniquelego, a LEGO creator working in South Korea. It's a great honor to introduce you to my work "Castle Concept Starbucks (Medieval Cafeteria)" today.
I made this work to realize a new attempt to break the framework of existing LEGO products. The reality is that most of the existing Lego products are composed of clear series distinctions such as Castle, Star Wars, and City, and that exchanges between each series rarely occur. Of course, there is a product called 1592 based on the castle costume in the city, but it's so old that Lego fans in the 21st century rarely get a chance to see it. So I made a combination of Starbucks and Castle.
This work is 2,229 pieces and consists of 4 stories in total. There are various spaces such as gardens, toilets, kitchens, cafes, and party rooms on each floor. I'll introduce you in more detail below. Then let's go to Castle Concept Starbucks with me!
* It's a completely imaginary piece of work, inspired by no real-world architecture, and used only Starbucks' IP.
* All minifigures are made by genuine LEGO parts, without custom parts.
1) Your model (what it is)?
This work was created by imagining Starbucks in modern tourist attractions based on medieval castles. Using Old Castle's baseplate, which can stimulate many people's nostalgia, we added the sensibility of the Castle series. Then I will introduce the components of each floor.
1st Floor (Ground)
- “Starbucks” Signboard
- "50% off if you dress up." signboard
- “Drive thru” signboard
- One mannequin soldier with dark green armor
- More than 10 kinds of plants
- Trails paved with more than five types of stone
- Pond
- One passenger in costume seat on a tour wagon (exactly the passenger is in the altitude of second floor)
- Horses and Horsemen
2nd floor
- Entrance
- Toilet in the form of a spire with one olive green flag
- Wall
- Kitchen
: three staff members(worn Old Castle's uniform), order table, pick-up table, drive-through table, coffee beans storage bin, oven, dishwasher, roaster, coffee extraction machine, and various food accessories.
- Tables and chairs
- Stairs
- One customer without costume
- One customer in costume
3rd floor
- Wall
- Tables and chairs
- Stairs
- 4 customers in costume
4th floor
- Wall
- Party rooms in the form of tiled houses with two dark green flags
- Soldier head-shaped roof decoration
- 2 customers in costume
- Barbecue oven
- Golden vase
2) Why you built it?
The first and most important reason is that I wanted to make a new concept. Why should Castle be Castle and City be City? Wouldn't combining the two create something completely different? My work started with this question. Castle, a series loved by many AFOLs, and City loved by many children. I felt that combining the two would make a work that would satisfy more Lego fans. And I put this into practice without hesitation.
Secondly, I wanted to make great decorations through Lego's works that focused on artistry. Decorating one's own living space using props is called "home decoration." So I wanted to make a work that can be easily used for home decoration. Usually, home decoration has used paintings, sculptures, crafts, or design elements, but recently, more and more LEGO products are used for home decoration, which have a similar level of beauty to existing interior products but can be placed on the cabinet. Moreover, if it's an ornament with a theme that everyone loves like this one, it'll be even more appropriate. That's why I made this work in a size that can be displayed in the house. Of course, it's a little big including the garden, but you can easily separate the castle and garden and display them in a small space!
Third, because I wanted to express my unique world of works. I'm always interested in breaking the boundaries of something existing and mixing the two to create something new. Destroy anything, create anything. Just like this work!
3) Why you believe it would make a great LEGO set?
First of all, this work is an ornament that can be highly liked by many LEGO fans. The dark green color, which has been well received by many Starbucks users, has been used to increase popularity and aestheticity through beautiful walls and gardens. In addition, mini figures with medieval costumes are provided. So this piece has a wide range of attractions that can attract fans of the Castle series, fans of the City series, and even fans of other series and people who like props. I hope that this broadness will make this work a great Lego set.
Next, this work is about the theme of "Combination between Lego Series," which has not been easily found. "Castle" and "Cafe" feel so far away. But in my hands, the two became one. Who would have imagined drinking coffee with a drive-through in a carriage? I hope that this work will be reborn as a great Lego set thanks to the originality of this theme.
Finally, this work has elements of fine-grained description and moderate size together. Recently, many Lego products aimed at AFOL are larger than 3000 pieces. These large products have strengths in detailed descriptions, but they cause a lack of space to assemble and display works. However, this work has been reborn as a work that has detailed descriptions and can be displayed anywhere in the house without any burden. AFOL wants a complex piece that can satisfy both the need for fine-grained description and the right size. I hope that this complexity will make this work a great Lego set.