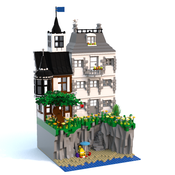 This miniscale model of the London Tate Modern is my latest proposal for a new Lego Architecture set.

It represents the old iconic Bankside power station, which was originally designed by Sir Giles Gilbert Scott and the newly-built extension, the Switch House completed in June 2016.

A bit of History:

In April 1994 the Tate announced that Bankside would be the home for the new Tate Modern. In July of the same year, an international competition was launched to select an architect for the new gallery.  Herzog & de Meuron were announced as the winning architects. The £134 million conversion to the Tate Modern was completed in January 2000. The most obvious external change was the two-story glass extension on one half of the roof.

The Tate Modern had attracted more visitors than originally expected and plans to expand it had been in preparation since 2004.

A ten-storey tower, 65 metres high from ground level, was built above the oil tanks.

The design, again by Herzog & de Meuron, has been controversial. It was originally designed with a glass stepped pyramid, but this was amended to incorporate a sloping façade in brick latticework to match the original power-station building.

Information about the project:

I kicked off this project by first designing the Power station. I initially thought this would be a relatively straightforward process but the chimney design was actually harder than I thought. The chimney is slanted which is virtually impossible to replicate in miniscale. I had to resort to ingenuity to replicate the slanted effect, thus slightly diverting from the original 1950's design.

However the main challenge was to model the Switch House.

The building consists of numerous triangular facades, which I found very hard to model in microscale. I am not 100% satisfied with the results and am therefore very much treating this part of the build as work in progress and would welcome any of your suggestions.

Finally, I added the side entrance leading to the boiler room and planted a few trees by the river side entrance and the rear of the building.

Dimensions and other useful information: