IL Tempo Gigante from Idea to Final Build and Working 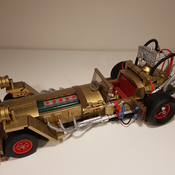 I have created a copy of Il Tempo Gigante final build

90 hours were used to paint and construct the real model

I made the motor work so you can se the pistons move when the car i driven and the fan will spin :)

The Toolbox is now able to open