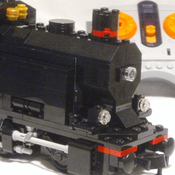 1966 marked the release of LEGO set 111, the first LEGO Train Set. It came with blue track on standard white 8x2 plates for sleepers (ties) and was the first in what was to become one of the most enduring and loved LEGO themes of all time.

Here at the Little Black Train Project, we are seeking to produce a set that captures the magic of the LEGO trains from the last fifty years and encourage a new generation to take to the rails with their imagination. Please click SUPPORT and help make this happen in 2016.

The Little Black Tank Engine is a Medium difficulty build made up of 162 pieces and is recommended for ages 7 – 99. The set complete with two carriages, an oval of track, a station and five minifigures should be around EUR120 or $USD150.

In order to capture the spirit of the great sets of the past, the following design parameters were decided:

The parameters were set to ensure the front of the locomotive didn’t clip point (switch) motors on 12v track like the Horizon Express, and that it would have no clearance trouble on tight 4.5v/12v passing sidings like the Emerald Night. These are both beautiful sets but they were never designed to be compatible on layouts with up to 50 year old track like this engine is.

The height was a difficult one to achieve as anyone who has tried to hide that battery box can appreciate. The original design had a vertically mounted PF-M motor in the cab but it did not pass the durability test or the pulling power test as assessed by my three year old Build Quality Assessor.

Both the height and durability were addressed by using a PF train motor as the rear four wheels. This is pivoted just behind the battery box and allows a small degree of rotation that is barely perceptible when it is negotiating curves. This places the bulk of the battery box weight over the centre axel, greatly increasing tractive effort. Fixing the rear coupling directly to the train motor increases the maximum weight that can be pulled when moving forwards.

In 1985 at the age of four I was given a black push along tank engine with shiny red wheels (7710). It came with two beautiful blue and yellow carriages, a circle of grey track and a station. At the time my loving parents had no idea how much joy I would get from this train as I slowly expanded my railway empire through my childhood. It taught me everything from basic mathematics (I have no 8x2s but I can use two 4x2s) to the value of tidiness (ALWAYS check the floor for LEGO before vacuuming). No matter how many times I moved house as a child, home was where my LEGO Train was. It was my constant and faithful companion.

The new Train sets today are awesome, but they are all huge. It is my wish that this Little Black Train can continue for my children what the great LEGO Train sets have done for the last 50 years.

The Little Black Train Project hopes this locomotive will be released as a set with two or three 4-wheeled carriages or wagons, an oval of track and a station with a driver and up to four other minifigures. We are currently working on improving these and hope your comments will guide us on if you want freight wagons or passenger carriages. At present most people are after 4-wheel passenger carriages in the same colour scheme as the exquisite Emerald Night carriages so that it can be used as a modern day tourist railway, however the votes can easily swing the other way.

We hope TLG seizes this opportunity to mark such a significant milestone with other releases and activities. We are thinking:

Please check them out, they deserve far more support.

This locomotive is loosely based on the DB Class 80 Heavy Tank Engine.

Those of you who are deeply steeped in the lore of L Gauge will be aware that there was a LEGO train released in some parts of the world in 1965. This was set 323, a red steam engine with a carriage. We have not called it the ‘first’ LEGO Train Set because it had road wheels and no track. At the risk of starting a “The Real New Millennium Started In 2001 Not 2000” debate, I am quite happy to discuss whether the celebration of 50 years of LEGO Trains should be celebrated in 2015 or 2016. Either that or we agree to disagree and all have two big years of playing trains…