Lord of The Rings Helm's Deep 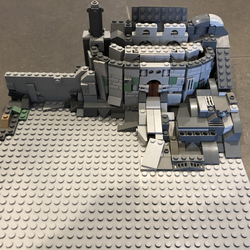 This is a Micro version of Lord of the Ring's Helm's deep. This was a castle that was used in the movie/book for the people of Rohan to flee from their villages that were being overtaken by orcs and evil  men. This fortress was carved of rock in a valley, so I built the fortress all out of gray and darker gray bricks. I was able to make the stair case famously in the movie where the king of Rohan (Theoden) Aragorn, Legolas, Gimli, and other knights of Rohan rode down the stair case into the orc army. I was also able to build the roundish walls and the iconic tower out of bricks too. I built it after I watched The Lord of The Rings Trilogy. I was inspired by the battle scenes and wanted to rebuild it in a micro build. I Believe this would be a great collector's item for people who love Lord of The Rings  movies and books. I also believe it would be a good set for people who like fantasy and castles of old, it would also be good for people who like medieval castle's and fortresses. I hope you will support and vote for this project to get 10,000 supporter's and hopefully it can become a LEGO IDEAS set. Thank you for your time and please support!
24
253
days left