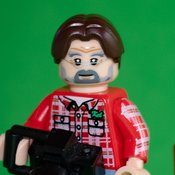 By jp-30nz1
54 comments
That little ol' LEGO set from Texas...
A LEGO idea I've had floating around in my head for years. The untimely passing of ZZ Top's bass player & vocalist Dusty Hill in July 2021 got things into gear. It's also the 50th anniversary of the band, and what better time to celebrate all things Texan Blues?
This set portrays the infamous Eliminator Hot Rod owned by guitarist and lead vocalist Billy F Gibbons, which was the star of many of the band's biggest 1980s hit videos.
The set comes with the 3 classic members of the band: Dusty, Billy and drummer Frank Beard, the Eliminator hot-rod, a section of highway, repositionable band riser, classic logo billboard, and some scenery. This is a physical build, but with photoshopped decals and hole in the billboard "P" (for now). You can reconfigure the parts to best suit your display space.
"She's got bricks, and she knows how to use them".
RIP Dusty Hill (1949-2021).