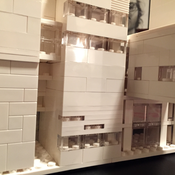 A landmark, An Icon

SET THE STAGE! "In 2006, the Guthrie finished construction of a new $125 million theater building along the Mississippi River in downtown Minneapolis. The design is the work of Jean Nouvel, along with the Minneapolis architectural firm Architectural Alliance and is a 285,000 square foot (26,500 m²) facility that houses three theaters: (1) the theater's signature thrust stage, seating 1,100, (2) a 700-seat proscenium stage, and (3) a black-box studio with flexible seating. It also has a 178-foot cantilevered bridge (called the "Endless Bridge") to the Mississippi which is open to visitors during normal building hours. The outside of the building's walls are covered in large panels which display a large mural of photographs from past plays visible clearly at night." - Wikipedia

The model is a scale representation of the exterior with no interior currently present. I used images online while also visiting the site for photos and verification of the exterior elements. The real Guthrie Theater is actually made up of dark blue metal panels on the entire exterior but the model was built using two of the LEGO Studio products - white colored bricks, since I did not have access to all blue pieces the final product would ideally be blue in color.