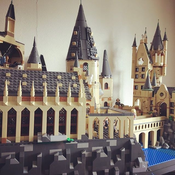 Brooklyn 99 is one of my all time favourite shows and I would love to see it in Lego form. It is one of the most inclusive and progressive tv shows I have ever seen. So I designed this!
The set as is, is around 1075 pieces and with 9 figures. I have tried to add in as much detail as I can so here goes:
The Bull Pen: Everyone's desk is here with personal touches for each member of the squad. You'll also notice the elevator where they start the day and the kitchen area. Complete with Mama Maglione lasagne and Garlic bread for Hitchcock and Scully.
Terry's desk complete with files, coffee and of course, yogurt! Terry loves yogurt.
Boyle's desk is complete with the mother dough.
Rosa's is made complete with her motorcycle helmet, sword and axe. Because what kind of women doesn't have an axe?
Hitchcock and Scully's desk is adorned with Pie and Pizza, despite their lactose intolerance.
Amy's desk is complete with that new binder smell.
Gina's desk has all she needs, her phone. Because playing Kwazy Cupcakes is far more interesting than her work.
Jake's desk includes his croissant, hidden behind the open cases mound of garbage on his desk. And guys, Algernon is back!
The Break Room: Comes with everything the 99 needs to relax after days chasing the Pontiac Bandit (could be an additional figure). Complete with bumper pool table, microwave, vending machines, and not forgetting Scully and Hitchcock's nap couch. There's even old Chinese food from the Jimmy Jab games.
Captain Holt's Office: Now first point on this, is there would be stickers for the news articles, pictures etc on the walls if this became a set. It would also be great to have a new piece made for Cheddar. It has Holt's awards, an antique globe and his medal of valour (if Jake hasn't taken it for another Halloween heist).
The Squad: If this were to become a set, there would be new printed pieces for the figures as always, so what is here is not my final idea on how everyone should look, but it was the best I could do with what I could use. For example, Jake would need his upside down (Die Hard style) police badge, Amy would be in a pant suit, Terry has to have suspenders, and Gina in a "Gina Know's best" jumper, because she does.
It was hard to know when to stop with this design, adding the holding cell, evidence room, briefing room, but then it would become far too large to be realistic as a set. So I settled on this. I hope you like it and give it your support :) thanks for taking the time to look at my idea.