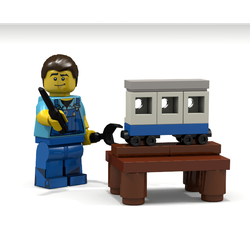 The model was inspired by one of Germanys most popular lighthouses: "Roter Sand" (Red sands). “Roter Sand” is located in the German part of the North Sea and was the first building worldwide which was constructed offshore. Special highlights of the LEGO model are the three oriels, the conical tower and its lantern house.  In the lantern house a “Lightbrick” is included to insure real light for the lighthouse. It can be switched on and off over an outside gearwheel. A take-away wall makes it possible to look inside the lighthouse. There you´ll find the keeper’s office with its desk, clock, lamp, several tools and most important the east-Frisian teapot. The LEGO lighthouse measures 59 cm in height, 15 cm in width and was built with app. 2500 bricks.

Here is a youtube video LINK to see the Lighthouse is really bricked!

Because of its curves and its conical shape “Roter Sand” wasn´t easy build. To me the technics I used inside to create the curves vary from the normal way how most people build with bricks. My model shows that there are possibilities to build curved and conical shapes.

I was inspired by my wife and our general interest for lighthouses.

It would be awesome if you could support me.