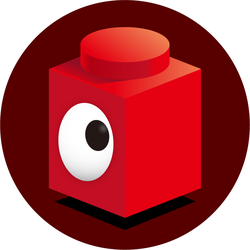 This work was based on Batman's Image who loves beat box in Lego movie.

Transforming his Bat-base into "Bass" box, and adding some scenes in the Batman's movie which will be released in 2017.
So, I  use "Bass Base" as its name. Just for fun.

Batman's Vehicle:
According to the six-wheel vehicle in LEGO Movie, to re-modify the size into one seat vehicle