A Tribute to Kraftwerk 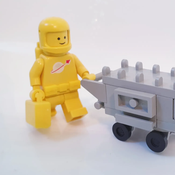 This project is a tribute to "Kraftwerk", the most famous german electronic music band. Producing ellectronic music since the 1970s, they insired generations of musicians.

I had the idea while viewing the booklet from the "Minimum Maximum" live album, lookingt forward to their concert next week in my hometown.But I didn't have all the bricks to build it real, so I used the Lego Digital Designer to visualize my idea.

The set is a former stage layout measuring 34 x 28 knobs with the characteristic bottom-lighted plateau, the 4 instrument desks, the three audio operators and one video operator as well as a background image. Here you see them performing the track "Autobahn". Other tracks / backgrounds are possible for sure. The overall piece amount as you see here is 315.

The band members should be shown in present time and as real as possible, so I decided to use real skin colour. From left to right these are Ralf Hütter, Florian Schneider, Henning Schmitz and Fritz Hilpert.

That's all I can tell at the moment - now feel free to comment and support.