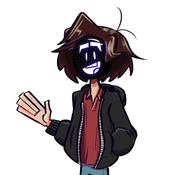 Thanks to all the supporters and Aardman Animation!!! Wow, so close to the finish line; 10k Supporters!!! I know I have said this but every time I mean it; thanks to everyone for supporting this project. This time I want to give a big shout out to Apollo Exconde for believing in my set from the start and to everyone who posted about it (like "Medieval_Lego" and "Matt - LEGO AFOL" on Instagram). And big thanks to Aardman Animation social medias, they really help showing my project to Wallace & Gromit's fans all around the world.

Last update to the set: I know this is such a little detail but I changed Cooker's "Antenna" to the actual piece. You have done it again, a new milestone for LEGO Wallace & Gromit set: 7.000 supporters!! I'm really thankful to everyone supporting, a really big thanks to all of you!! Now, for this update I will share with you one of the most important thing in the process of making this set, the design of Gromit's ears.
Gromit's ears evolution Since LEGO Ideas doesn't allow custom molds I needed to figure out how to make Gromit's iconic ears. First I tried with exixting ears for minifigures (like Black Panther's), but they weren't convincing me. So I decided to make them with pieces instead; this is how I got the first design for the old version of the set using wampa horns (left and right). Althought I felt much pleased with this design compare to the previous minifig ear piece, I didn't feel satificed. So I search for rounder and shorter pieces to represent the ears until I found in my opinion the best solution: cattle horn pieces. I know that is not perfect but is the best way to represent them.
On May 22, 2022 Ones again you have surprised me by reaching 6k supporters!! It's incredible to think all of you that have supported in 4 months, thanks to everyone. For this occation I bring the first vignette based on "the wrong trousers" film (I hope you like it).
Interview: behind the process of LEGO Wallace & Gromit I did an interview with Apollo Exconde about my LEGO project. We discuss the process behind the design, some advices for LEGO Ideas and creations and, of course, a lot of talking about Wallace & Gromit. If you want to see all of this, you can see it here (and excuse my english).
On Apr 15, 2022

the new updated look of the set + feathers Hi everyone, this time I want to share with you the look of the set with all of the updates. I had read a lot ofsugg estion from you about things/characters to add and all of them were great and also neat ways to reference the adventures of the iconic duo. But unfortunally I can't add all of them; so as a way to celebrate your support, I decided to add the most requested thing thought this time (or should I say bird?)
"Have you seen this chicken?" That's right, Feather McGraw is now a brick-built character. But if he is not in the window, who is it? It is Fluffles, one of the most recent characters from the franchise. I know there are people that prefer the window print version of Feathers, that's why I decided to make a two-sided printed window. This is probably the last update for the set because I don't want to keep adding things that would make it too different to what I originally proposed. But I will keep doing other types of updates like the "iconic moments" mentioned on the last post. And finally thank you all for supporting and for your feedback, tell me what you think of this updates.
On Mar 27, 2022 I'm really impressed with all of you, I'm glad for your reception of the project, your feedback and your support; I'm grateful to all of you. We're at the half of the support needed to reach the "Review Face", but that doesn´t mean that won't come updates.
NEW FORMAT OF UPDATES: ICONIC MOMENTS
I'll be posting images to represent iconic moments of the franchise in LEGO to celebrate milestones of the project. The difference with this kind of posts is that they aren´t updates for the Ideas set, they will be just vignetes with some parts that are in the set (take for example the +5.000 celebration image). In order to make this less confucing, I'll be adding on the edge of the picture a warning and also a cork board in the background of this posts (as seen in the example). Well, you keep amazing me with your support. A sincere thank you to all of you. And as tradition I brought to you some updates for the build except this time are more changes than adds on to the set. First of all I'd added to Wallace's bed the fuction to slide him to the first floor. In order to do this I'd had to change some parts of the seconf floor slab, like adding one plate of space on the base and also technic pieces in between for the new function. Wallace's bed and closet also went throught a redesign. And for last I did a physical version of the brand new function for you to understand how it works (keep in mind that the colors and some builds do not represent the final build of the set, this is only to show the function) Hi everyone, this time to celebrate the 2.000 supporters I decided to update Wallace and Gromit's faces. Since LEGO usually don't put nose in minifigures I'd decided to erase in Wallace's eyes a small space to represent the space where the nose would be and also I put a shadow above the mouth for the same reason. And finally I'd put more details in his mouth. In case for Gromit I'd change his ears and also did a little change for his nose.
What about Feathers McGraw?
I'd received a lot of request about including Feathers in this set and the reason why I haven't done it is because I can´t make him in LEGO in a way that really represent the character. Here are some design that I'd made but they don't convince me. If you think that one of this desings works let me know in the comments but for now Feathers will remain as a print in one of the windows. I'm grateful to all of you for your support of this project and reaching this goal, thank you very much. For the occasion I've decided to update the set with a small buld: Gromit´s plane from "A Close Shave". Includes the soap launcher on it and a helmet to add to Gromit. (I'll update the front page to have it). I also want to show you the costumes of the characters, including the new Gromit's helmet and now a chef hat for Wallace for his bakery.