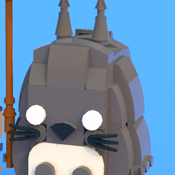 By Bismuth83
21 comments
Venture down to the Dwarven mines, where fun will surely await you. Inspired by works of fantasy seen throughout folklore and media I have submitted Dwarven Mines' in the hopes of it becoming a real lego set.
The proposed set is made of 4 scenes. The Mine entrance, a condemned mine shaft that has become overrun with rock monsters, a forge for the dwarves to smith their ore into something more valuable, and a market stand where the dwarves can sell their wares to passing traders.
This model would be great for both play and display, with appealing aesthetics and excellent storytelling poteinal provided by the included minifigures, maybe the Troll is a brigand trying to rob the trader on the path above the mine, or perhaps he is the hero helping the Dwarves defend their mine from vicious rock monsters or maybe the rock monsters are themselves the heroes, protecting their home from the miners. My proposal contains 6 printed minifigures and one unprinted statue, the minifigures include 5 dwarves (2 miners, a merchant, a guard and a blacksmith) as well as an Elf trader and a wandering troll. Also included in my proposal are two goats, to act as a cargo caravan for the Eleven Trader (Inspired by the video game 'Master of Olympus: Zeus'), 2 rock monsters* (a throwback to the beloved Lego Power Miners theme), and a small bird who sits in the tree (the bird isn't in the pictures as the part I wanted to use wasn't on LDD).
So if you want to see this as real lego product (or know someone else who would) then don't hesitate to click support and share with like-minded folks.
*-  If lego don't want to resurrect the old rock monster parts  they could still be made to look like the rock monsters from power miners using parts from the minions and Mario lines.