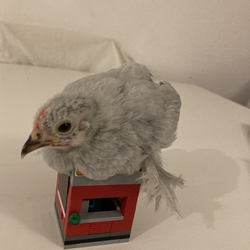 Bernardthechicken1
11
I built it as I like fair ground rides. It can be incorporated in to a fair. It can travel as I made it to all fit on the back of the lorry with a ticket booth trailer too.
It has six figures but could have more.  It has a turning handle to give either a gentle or scary ride. There can be a maximum of six figures on the ride.
I believe it could be a good Lego set as it is not too complicated but fun as you can spin the figures all the way round. It can also have a motor added to it instead of you having turn it.

I am 13 and I go to a special school but I haven’t been able to go to school since March so have been working on Lego projects instead this took me one week to design and make. I just like to make my own Lego ideas as it can be very hard to follow instructions for me.

I really hope you like my idea as I think it is fun! Thank you.
11