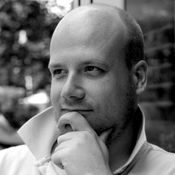 The Blacktron® T-1 "Scorpion" is an Ultra-Compact Space Interceptor (UCSI).
Currently it has a Blacktron® inspired dark colour scheme: mainly black, with a few orange accents and trans-neon orange for weapons, comms, engines and thrusters. Initially it was designed with a much lighter (Futuron®-like) colour scheme: mainly white, with some black parts, trans-dark blue for weapons/comms and trans-red for engines/thrusters. Due to the unavailability of a crucial part I decided to create the model with a dark colour scheme first.
The main body is shaped around three 3 × 2 brackets (aka Space Seats), constructed in a T-shape (hence T-1). This idea was based on a similar -but more basic- model I built as a young teenager. At the time I didn't have all the parts to complete the model. The idea resurrected 33 years later, when I used BrickLink's Studio for the first time earlier this year. At last I had access to all the bricks/parts to create and enhance the set as imagined.
It just looks awesome to me. I think the proportions are just right, its classic space style is recognisable and modern. The set is easy to build. Also, the playability is great fun with all the detachable extras, such as the double-barrel blaster, missiles and scanner tool.
The model consists of 64 parts (excluding 11-part minifigure) and its dimensions are 4.5 × 3.7 × 3.5 inch or 11.5 × 9.5 × 8.8 cm (both LWH).
Visible parts list (named sequentially):