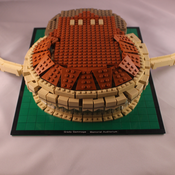 Grady Gammage Memorial Auditorium was the last public commission of the American architect Frank Lloyd Wright.  Located in Tempe, Arizona, the building’s construction began in 1962, and was completed in 1964.  21 years later, it was placed on the National Register of Historic Places.  Today, Gammage has celebrates its 50th anniversary, and continues to present the best of Broadway, as well as artists from around the globe!

I created this project to pay tribute to the beautiful Gammage Auditorium and to commemorate its first amazing 50 years.

Gammage has a personal significance to everyone who has visited to perform or see a performance. I am no exception: I have lived in Tempe my whole life, became involved with theatre during high school, and have been attending Gammage performances for longer than I can remember.

Gammage Auditorium is a leading provider and teacher of the arts in the valley, and has been for the past 50 years.

Thank you for all of your votes, support, and suggestions for the set.  I am always open to improvements and would love to hear your thoughts on this set.

***This project was created by Kyle M. Wright, TheWrightBricks***