The Attack on Grayskull 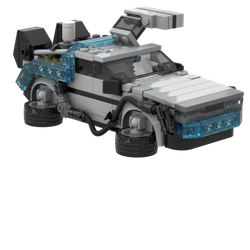 Based on the 1980s franchise Masters of the Universe, this set features the heroic He-Man, Ram Man, and Battle Cat defending Castle Grayskull from the evil Skeletor and Trap Jaw driving a Roton. It would be a perfect compliment to the existing Ghostbusters and Back to the Future LEGO Ideas sets.

Knowing that the world of Eternia is vast and densely populated, this set was designed to get as many elements of the original Masters of the Universe toyline into a realistically sized/priced LEGO set as possible.

Castle Grayskull was scaled to match the minifigures in the way the original playset matched the original action figures. This meant certain play features like the elevator and trap door were lost to keep the size and stability on point, but keeping Castle Grayskull smaller meant the set could include a brick built Battle Cat and Roton to add play value.

If these pictures stir the same nostalgia in you that they do in me, or if you're just a fan of fantasy and adventure in your LEGO sets, please consider supporting The Attack on Castle Grayskull.