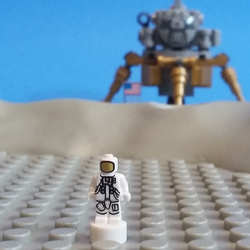 classic spaceman 1
35
363
days left
Three, two, one... blast off!
This science fiction spacecraft is designed to mine the rich minerals off of asteroids. Here in this set, we have one mining spacecraft, a miner, and a asteroid to mine. The ship is equipped with two arms, storage, tools, and a place for the pilot. I was inspired by this idea from the Lego idea creation "Space team: Bubble Scouts". I thought, "Why not make a spacecraft that mines asteroids".So I got working on it. It was a fun build and I think others would have fun playing with it. I think Lego should have this idea because it's a fun and adventurous idea.
35
363
days left