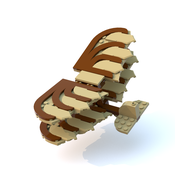 Back when other people can only dream about it, these pioneers went to realize one of mankind's oldest and most persistent aspirations—human flight! Now you can also live up to that moment in history by building the most historic and important flying machines in the history of aviation, starting from George Cayley's Governable Parachute, Otto Lilienthal's Glider, and The Wright Flyer. All with complete details & features, including the engine on the flyer and adjustable wings on the glider.

All of the aircraft could fit one minifigure. Display stand included, so you can use this set as a playing-set or a display-set. Custom Stickers will be used for the names and schematics of each aircraft.

Hope you like it, please let me know if you have any other suggestions or inputs. And thanks for the support!

More details on the figures:

George Carley, father of the aeroplane, marked a turning point in the history of aviation. When he begun the first rigorous study of the physics of flight and designed the first modern heavier-than-air aircraft in 1799, aviation took root as a scientific endeavor. He identified the four vector forces that influence an aircraft: thrust, lift, drag and weight and used it to establish the basic principles and configuration of the modern aircraft. Cayley's published writings laid a foundation for the scientists that followed him, including the work of the Wright brothers.

Otto Lilienthal, the flying man, is the most influential glider pioneer. Between 1891 and 1896 he made nearly 2,000 brief flights in 16 different glider designs based on his aerodynamic research. After nearly two decades of experimentation and research, he produced the best and most complete body of aerodynamic data up to that time. His picture soaring gracefully in his glider also had a great psychological impact on aviation, Lilienthal’s fame and this visible proof that a human could fly inspired other experimenters. Wilbur Wright once said that Lilienthal was without question the greatest of the precursors, and the world owes to him a great debt.

The Wright brothers, Orville and Wilbur, are known for inventing, building, and flying the world's first successful airplane. The findings of several key 19th-century experimenters provided useful pieces to the puzzle and saved the Wrights from pursuing many unfruitful avenues of research. The Wrights built and tested a series of kite & glider designs from 1900 to 1902, and constructed their own wind tunnel to measure lift and drag on the 200 wing designs they tested. The Wrights make serious attempts to simultaneously solve the power and control problems on flight, and they eventually made the first controlled, sustained flight of a powered, heavier-than-air aircraft in 1903.

The genius of Wilbur and Orville lay not only in the singular act of getting a flying machine into the air, but also in the approach they evolved and employed to create the technology of flight. Their method of evaluating data, testing an aircraft in flight, then refining the design based on those results, remains an essential tool in aerospace research and development.