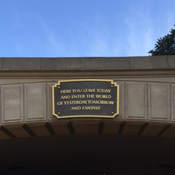 By HollywoodBrickByBrick
20 comments
"If you build it, he will come." - Ray Liotta, Field of Dreams
In 1915, Carl Laemmle opened Universal City Studios on a ranch in the San Fernando Valley. This modest backlot would evolve over decades into a massive studio that would release classic films such as Dracula, Psycho and Back to the Future. But the Universal Lot wouldn't just house the magic of Tinsel Town. It would also be home to one of the most thrilling theme parks in the world...
Welcome to Universal Studios Hollywood, The Entertainment Capital of LA™! This 1487-piece set features the iconic, towering gate that millions of tourists pass through every year. This build contains four segments that can be displayed as either separate sections or combined into a stunning display piece compact for most shelves!
I grew up going to Universal Studios Hollywood since I was a kid. I've seen the sad closure of several attractions dear to me like Back to the Future: The Ride and ET Adventure, and have cherished new additions such as Harry Potter and the Forbidden Journey and The Mummy's Revenge.
It's time for a detailed set that honors one of the most celebrated theme parks of all time. Considering LEGO's successful recreations of Cinderella's Castle and the Disneyland Railroad, the possibilities for this set are endless!
I truly appreciate every follow, comment and "like". Let's get to 10,000 and show LEGO it's time to immortalize where Hollywood dreams are made!!!