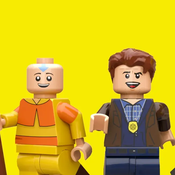 ATTENTION SQUAD!
Firstly, a huge thanks to the 10,000 amazing people who got this project to the review milestone once already, I cannot express my appreciation enough! I’m not giving up on this project and that’s why I’m super excited and proud to bring you the new and improved Brooklyn Nine-Nine: 99th Precinct!
Iconic Locations
Holt's Office, Break Room, Kitchen, Printer Room, and of course, the Bullpen
The Squad
This set comes with 11 iconic characters from the show:
This most recent version of the project with a total of 2,000 pieces LESS than the very first submission, but with the same amount of detail, lends itself to including more iconic characters, similar to the new LEGO The Office set.
Easter Eggs
The set is packed full of Easter eggs, whether it's the unique custom printed accessories for the minifigures, or the hidden Easter eggs around the set.
My personal favourites include:
About the Idea
This set comes in at a little over 1,500 pieces, with the bulk of this piece count coming from small 2x2 tiles used for the flooring. If this set were to be made, this would mean that the price per piece would be quite low! Making this set very affordable!
In 2021, 10,000 amazing people got this project to 10,000 supporters and in to the 3rd review of 2021! Unfortunately, it didn't make it all the way through and was not approved in favour of some truly amazing sets. With the Big Bang Theory, Friends, Seinfeld and The Office all immortalised in LEGO, it's about time for such a popular show such as Brooklyn Nine-Nine to follow suit, and as the show has now come to an end with Season 8, it would be great to see the series immortalised in to LEGO form and with as much detail as possible!
So if you're a fan of Brooklyn Nine-Nine: give this your support! Every support is much appreciated. Let’s get this set back to 10,000 supporters and see if we can get it approved this time!
NINE NINE!
Dismissed.