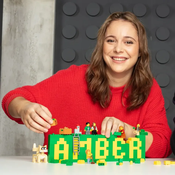 I present thou the updated cottage owned by the famous Salem witches: Winifred, Sarah and Mary Sanderson from the 1993 Disney film Hocus Pocus.
As a child, I spent a lot of time watching Hocus Pocus. Not only on Halloween, but also throughout the year. When I rewatched the film and got a glimpse of the Sanderson sister’s cottage, there was just one question popping up in my mind. "Why is there no LEGO set of this yet? I would totally buy it!"
So I grabbed my computer, learned how to use Stud.io and got started right away. I wanted to recreate the cottage including all of the fantastic characters with all the details I love about the film. I couldn’t stop designing for the first few hours, it was so adictive an so much fun.
After many hours, weeks and months of hard work, I present to you LEGO® Hocus Pocus - The Sanderson Sister's Cottage - UPDATED.

When built, this LEGO® Hocus Pocus - The Sanderson Sister's Cottage set measures over 17,7 inch (45cm) high, 16,14 inch (41cm) wide and 18,1 inch (46cm) deep, making it a challenging construction kit and a great brick-built model to display. This cottage is filled with details from the movie to bring the story back to life and to recreate all the magical events that happened at the Sanderson home.
The set consists out of 2992 parts.
It includes the openable Sanderson Sister's Cottage, Billy's grave and 12 Minifigures:
Winifred Sanderson, Sarah Sanderson, Mary Sanderson, Max Dennison, Dani Dannison, Allison, Emily Binx, Thackery Binx, Binx (as cat), Billy Butcherson, Ernie/Ice and Jay.
The Dani, Max, Allison ice and Jay minifigures all feature two faces allowing you to pose them with a happy face, or a scared one.

You will be spellbound by the endless magical possibilities within this iconic cottage.The cottage is cusomizable to look like the Sanderson Sister's home from 1693, as well as the Sanderson Witch Museum from 1993. You can turn it into the museum by simply adding the black flame candle info-stand, the museum signage, some rope barriers and a cash register

which can be hidden away in the secret storage under the stairs.

Help Binx protect the black flame candle on Hallows eve!
It's a magical candle made of the fat from a hanged man. If lit by a virgin during a full moon, the spirits of the dead would raise for one night.

The spellbook comes with the spell used to turn Thackery Binx into a black cat.

Spin the watermill to help Thackery enter the cottage.

The Sanderson sisters even own a portrait of their master.

Come, we fly! Every Sanderson sister has her personal flying object. Winifred has a broom, Sarah a mop and Mary has a Hoover.

You can put Ice and Jay in the cages and spin them around untill they're dizy.

Make sure to wake Billy, he's been sleeping in his grave for 327 years!

But don't drink the green potion if you're a ch-ch-ch-child.

Of course there is a triple bed so the Sanderson sisters can get their beautyrest, which is needed.

I feel like this would be a good LEGO set because it can be used as seasonal decoration since Hocus Pocus is one of the most popular and fan favorite Halloween movies of all time and it would be perfect timing for the release of the second Hocus Pocus film coming soon! In 2023 it's also the 30th anniversary!
This set wouldn't only be perfect for die hard Hocus Pocus-fans but also for the ones that love spooky and haunted houses, Halloween and well.. just a bunch of hocus pocus!

Would you love this set to be real? Help by clicking the support button! Already done that and want to help even more? Please share on social media using the tag #LEGOHocusPocus! Together we can do this!
TheAmbrinator - Amber Veyt - Belgium