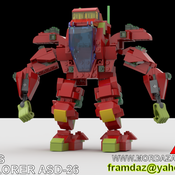 Its a Mars exploration robot able to move on Mars desert-like surface and capable to grab and move heavy weights such as rocks and supplies big crates. This robot is able to jump and boost thanks to the incorporated jetpack. Its hard and robust structure ensures hard conditions won't damage it or its pilot. Explore Mars with this great machine companion.

Features
The Mars Explorer ASD-26 has several movable joints making it possible to walk and move arms in varios directions, making it possible to reach places hard to access, also its very easy to make it show any pose you want. It has a transparent cockpit allowing to see clearly through it and several pieces meant to act as lights and antennas to maintain communication with your base. A pilot with protective suit and helmet is included in the set.

Conclusion
I worked on this set for quite some time with the Lego Digital Designer, thinking about the best way to make the joints the best way, in order to make it possible to bend them most maintaining a cool aesthetic and not making the robot too big or too hard to assemble, also making it balanced. For me its important to think that its a realistic design, something that could be built for real in some years when human reach Mars, and overal something that can be seen as cool and fantastic to develop imagination towards what we will find on the red planet =).