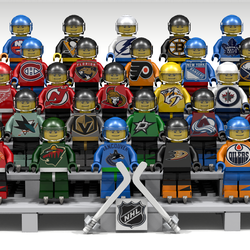 In this LEGO hockey rink, you can easily imagine a hard-fought match between the red and blue teams. The players enter through the passage on the rink, skating across the ice as they try to get control of the puck and ultimately hit it into the opponent’s net.  From the stands, spectators can easily watch and enjoy the game as hockey players skate furiously across the expanse of ice.

This set is made of 862 bricks and includes 9 mini-figures:

The ice was created with flat transparent bricks above blue blocks.

Dropping the puck… Game on!