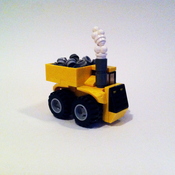 The worlds most fearsome fighting team face of against Krang in his android body! This set is inspired by the 1987 animated series and the toys released in the late eighties and early nineties.

The set consists of a street base with wall backdrop, a six stud wide Party Wagon that seats three quarters of a ninja team and Krang's goofy looking android body. I have gone all out with the minifigures, and the set features all four ninja teens, Master Splinter, April O'Neil, Casey Jones, Shredder, Krang and two Foot soldiers. If this set ever gets realized, I would love to see Bebop and Rocksteady included. I would also like the lower half of the face of the android body to be printed on the 2x2 round tan brick.

The 30th anniversary of the original cartoon is coming up in 2017, so this is the time to wallow in nostalgia for the Teenage Mutant Ninja Turtles of yore!