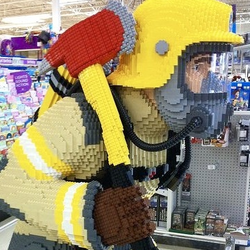 This Imperial Probe Droid consists of 219 pieces of Lego. The upper pod sensor array rotates 360 degrees and the manipulator arms move up and down this causes the power maul grabber on the end of the arms to close around whatever the probe wants to sample. The central repulsorlift generator glows with power producing energy for propulsion and defensive power fields.

The 'real' Imperial Probe Droid is a deep-space exploration and reconnaissance probe which consists of a central pod which has a variable number of retractable sensor manipulator arms designed to gather samples. The pod contains a multitude of sensor arrays including motion, sound, radiation, magnetic, atmospheric and cameras. Information is transferred to its superiors via a holonet transceiver. The propulsion system under the pod is a repulsorlift generator allowing the probe to easily move over any planetary surface.

LED lighting could easily be added to enhance the ominous sensor 'eyes'. Any other suggestions for further improvements or comments are welcome.

I have really enjoyed designing and building this model. If it grabs you please offer your support. Thank you.