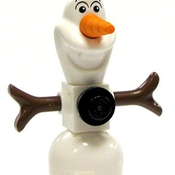 Let's face it we all want a Lego Titanic that's not too expensive or too complicated so I have built one to submit to Lego ideas it has flagposts, bent funnels, a triangle bow, round stern, windows, and propellers just like the real one I took into account all the most important details it even has an iceberg and a splitting point. The splitting point is more based on the 1997 movie but I think it's still important to have since the Titanic broke in two as proven by the two pieces at the bottom of the Atlantic.

I think this would make a great Lego set because it is well known and does not apply to a limited audience. Kids love boats, spaceships, planes etc. so they are sure to get a kick out of this. Adults might also enjoy this too because they can display it, it makes a really nice display piece. I keep it on my shelf and it looks great but it is also fun to make it hit the iceberg and then tilt it into a drawer to make it look like it's sinking and make it split. So it's great for play and display, even if this doesn't get approved or 10,000 supporters I just want people to see it and I hope they like it.