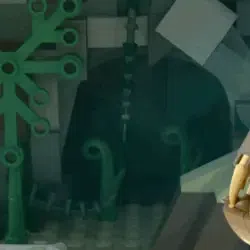 Hello and welcome! This is my set proposal for the battle scene seen in Star Wars: Episode II: - Attack of the Clones (2002) taking place within the Geonosian Arena (Petranaki Arena).

This set has never been made before into an official product and so it would be a great scene to implement into the Star Wars line and it would add many new characters/creatures which have not been done before and would bring new interesting colour and decal pieces.

Want this as a set? Then make sure to leave a support on it if you can. Every support,comment,share makes a difference and if most who witness this project would leave a support it would surely reach the goal in no time. I hope you like it and thanks for checking it out!

Padmé and Anakin face the Portcullis gate as it rises. The Geonosian executioner cart pulls them along to the four pillars at the other end of the arena's stage they notice Obi-Wan to their left as Geonosians secure there hands on to the other pillars. A roar erupts from the Geonosian crowd as three dangerous beasts sprout from three different gates in front of the pillars. "I have a bad feeling about this" - Anakin remarks as the three beasts lumber towards them directed and prodded by various Geonsians on top of Orray beasts.

Can the Jedi face such a test or will the beasts win, while the separatists watch with joy from their high viewing box? You can decided with this potential arena set bend the rules and decide who wins or re-enact the scenes from Attack of the Clones.

Note: this is all easily changeable if it were to be a official product. There would likely be changes to reduce piece count in areas using more efficient brick placement and build methods.

The arena section is the piece most likely to change from this draft stage to further stages and it is the section with the most bricks and so these current piece count values most be taken into account with the idea that this still in the idea proposal stage and does not necessarily represent the final product.