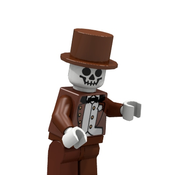 I think, everybody knows these two cult movie actors and probably this cult car as well. So I don't have to introduce them any further.

I have chosen this film, representative of all the other Bud Spencer and Terence Hill films - which are of course as good - because the buggy is one of the things from all the films with a very high recognition value.

The set would feature the buggy and of course minifigures of Bud Spencer and Terence Hill as Ben and Kid.

The buggy is six studs wide and therefore minifigure scale. Regarding the size it perfectly fits in every LEGO city. So with this set you would be able to replay all your favorite scenes from the movie in your own LEGO town.

The last picture is a rendered image that shows the buggy with a lighter yellow top, which for now isn't buildable in real because not all parts are available in this color. In my opinion this color would come closer to the original color of the buggy's top.

There will be some more new product ideas of mine coming soon, so make sure to check out my other entries as well: https://ideas.lego.com/profile/Versteinert/entries?query=&sort=top