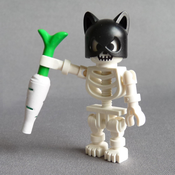 The Story
In the not so distant future, Earth is invaded and quickly subdued by an alien race called the Inbit. Years after a failed liberation attempt by the Mars station's forces, a second Terran attack is attempted with a force armed with new weapons vastly superior to the enemy, but again Inbit defenses prove to be too strong. One of the few survivors to reach Earth is Stick Bernard, a young mecha fighter pilot who witnessed the death of his fiancé in the battle. Separated and alone, Stick sets out to attempt to complete his mission to find Reflex Point, the suspected Inbit headquarters, and do what he can to destroy it. Along the way, he meets up others who join to form a small guerrilla unit who must find their way to Reflex Point and stop the Inbit!
Armor Bike
The Armor-Bike was a type of mecha armor system that was developed and used extensively against the alien forces of the Inbit. This system functioned to enhance the survivability, strengths and abilities of its user. Its vehicle mode made it closely resemble a motorcycle and was used as the primary means of transport. By a quick sliding of a switch, the rider was able to initiate the transformation into Ride-Armor mode, where it attached to its operator's Riding Suit and became an extension of it. The Armor Bikes were equipped with a modular weapon system that was mounted in vehicle mode and served as hand-held weapons in Ride Armor mode.
The LEGO Build
This build consists of three Ride-Armor's: Scott (Stick) Bernard's VR-052F, Lancer (Yellow) Belmont's VR-41H, and Rook (Houquet) Bartley's VR-38L. Each were featured in the Japanese animation series "Genesis Climber Mospeada" and it's American adaptation "Robotech: The New Generation". The Ride-Armor consists of two parts, the Armor-Bike (Cyclone) and Riding Suit. The Riding Suit is fully poseable and can be played with separately. The Armor-Bike has functional wheels and can support the weight of the Riding Suit. With the two, you can create various poses to recreate scenes from the anime. In addition, the Armor-Bike is fully transformable into armor that mounts to the Riding Suit, to become Ride-Armor (Battloid) mode. In this mode, the you can pose the model with the different weapon accessories that are included:
VR-052F Ride-Armor S. Bernard Type (Green)
1 x Particle Beam Rifle
2 x Forearm mounted rocket propelled grenades
Consists of a total of ~955 pieces:
Armor-Bike: ~534 pcs
Riding Suit: ~421 pcs
VR-041H Ride-Armor L. Belmont Type (Blue)
1 x Laser Blaster
2 x Forearm mounted wave sabers
Consists of a total of ~958 pieces:
Armor-Bike: ~537 pcs
Riding Suit: ~421 pcs
VR-038L Ride-Armor R. Bartley Type (Red)
1 x Auto Bazooka
Consists of a total of ~914 pieces:
Armor-Bike: ~517 pcs
Riding Suit: ~397 pcs
Transformation Sequence
Below is a video I made of transformation of the VR-052F from Armor-Bike to Ride-Armor mode!
Side Notes on the Build
I actually started working on this Build back in 2016 -2017, but I had been in hiatus since then, due to personal reasons. I have only had time to start working on it again in 2020 during the start of the pandemic. After starting up the project again, I found that there were many new parts that had been released. This helped me in areas that I wasn't really able to tackle with the parts I had available when I first started it.
I built this model because I was a huge fan of the Robotech series when growing up in the 80's (It was only years later that I found out about the different Japanese animated series that it was based on). Of the many transforming "mecha" featured in the different series, the Cyclone (Ride-Armor) was one of the most memorable to me (right up there with the VF-1 Valkyrie).
What intrigued me the most about the Cyclone was the amount of thought and engineering that was put into the design; it was pretty ahead of its time. When I was a child, I remember trying to build the different vehicle, ships, and mecha using whatever LEGO bricks I had. Although my LEGO builds looked nothing like their animated counterparts, they were close enough for my imagination. Now, after over 30 years later, with a vast number of LEGO bricks to select from, I am able to relive my childhood memories in building this LEGO Cyclone. I enjoyed the challenge of figuring out how to make the transformation work without removing as much pieces as possible. Not only did I want to bring back a sense of nostalgia to those who also remember both series, I also wanted to inspire Lego builders around the world and show that anything is possible with Lego!