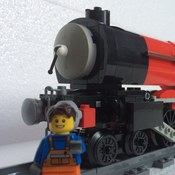 By TigersMeg
18 comments
It is a LEGO steam passenger express train. We built it to give our minifigures a faster way to get between rooms in our house (and to get donuts from the shop!) We were inspired by the MOC builds and thought that others would like the chance to build something more detailed and closer in scale to the real things. It would make a great set to expand or start someone's LEGO train collection.
The train is wider than the normal trains (by two studs) to allow more room for passengers and their stuff. It is motorised and uses LEGO remote control, (thinking of adding lights as we develop it!). It is different to other LEGO trains because it is closer in scale to the real locomotive sizes and has a coach (just one at the moment, thinking of adding more) that is longer than the ones you normally get in a steam locomotive set (e.g. Emerald Night or Hogwarts Express).
In a further update it will have doors on the coach and a removable cab on the loco and roof on the coach. The detail level is going to get better as we update it and (hopefully) more people support it.