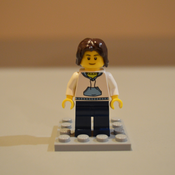 The Empire Strikes Back is my (and many other people's) favourite Star Wars movie and one of the best films of all time. For some reason Lego has never made a proper set depicting one of the greatest identity reveals ever when Darth Vader tells Luke Skywalker that he is his father. I love that scene and decided to make my own version of it. I watched that part of the movie about 20 times to get all of the details correct for this set.

I made it as accurate to the movie as I could while making it a cool set to display and play with. The near wall of the hallway areas is easily removed for accessibility. I even have parts of one of the side walls come off so that Vader can throw debris at Luke and knock him out of the window, which is removable as well. I have the set raised up quite high so it gives Luke further to fall when he jumps off the platform.

I put a lot of effort into creating an accurate scene that is sturdy and fun to play with. Please show your support if you'd like to recreate this iconic scene in your own home. Thank you!