Flip a Coin (The Game) 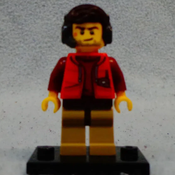 By BrickMaster48
8 comments
Flip a coin is a game that uses tokens to mark the spots on the board ;it also includes six brick built coins one coin has heads 2x the other side is the same, the next coin has the same except it has tales , then the next two coins have heads on one side tales on the other side except one has 2x and the other has 3x, and the last two coins  have 3x one of them has tales on both sides the other coin has heads on both sides. So how you play is you put the coins in a container and roll using the tokens to mark your spot. When you land on a space with a copper colored circle you pick someone to go against then you pick a coin from the container and flip it .If you picked heads and it landed on tales the other person gets the points. How you figure out the points from that is you multiply the number on the coin by the number on the die. I think this will be a great game for many people to play .If you like this model check out my spotted lantern fly model.