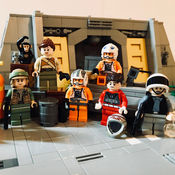 if you would like my idea as an official LEGO set please click the blue support button at the top and feel free to share the link on social media. If this submission gets 10,000 supporters it could become a real LEGO set and sold in stores.
The idea of this project started the day when my 5 year old daughter June asked me to help her to build a LEGO castle. When digging in her parts box full of beautiful colored LEGO parts from her first LEGO Friends sets, I had the idea to rebuild the legendary LEGO 375 Yellow Castle with newer parts and newer colors.

A3 Princess June's Castle Blueprint Poster: >>> DOWNLOAD HERE <<<
The Yellow Castle was my first LEGO set with 'real' minifigures as we know them today and was one of my favourites LEGO sets in my childhood. The number of minifigures (and arms) included in this set was amazing and the huge number of yellow parts were later on used to build many other creations like houses, forts, airplanes and spaceships.
The first step of work for this idea project was to rebuild the original castle (BTW, the small number of building steps in the original build instructions is amazing), then I changed the color scheme and the basement of my idea was done.
Step by step details where added, parts replaced, structures changed and so on.

The final result is a completely new castle, however with still the characteristics of his famous predecessor (this was important for me): two small towers, a larger tower, a drawbridge in front, a back gate and the typical unfold mechanism.

The final castle is now a model of +- 2500 parts including
The castle itself is built with standard LEGO parts in existent colors.
Additionally the creation contains also some minifigures and animals:
A small carriage, a treasure chest, some boxes, barrels, minifigure accessories and many food elements are also part of the inner life of the castle.

Expand June's World: Princess June's Siege Tower: >>> INSTRUCTIONS HERE <<<
Blue is one of my favorite color, that's why I decided to use soldiers from the King Lion series for this project. Unfortunately these minifigures and their arms and accessories are not sold any more by LEGO. An approval and a release of the castle could bring them back.
The project idea is a tribute to the LEGO yellow castle and its Designer Daniel August Krentz (R.I.P 2016 †) but also a tribute to my daughter June, that's why I chose the project name Princess June's Castle.

Expand June's World: Princess June's Carriage: >>> INSTRUCTIONS HERE <<<
I hope you like my very first medieval construction, as until now I only collected and built from the LEGO Star Wars Theme. ;-)

Thank you very much in advance for your support and feedback.
With kindly regards,
legolux1973