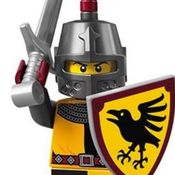 By Bricks Of Glory
30 comments
Hey everyone! This is Baymax. Baymax is a lovable character from the Disney movie, Big Hero 6.  He is an inflatable health robot, created by Tadashi Hamada. He is later found by Tadashi's younger brother, Hiro, and is reprogrammed to fight crime and stop a criminal, who stole Hiro's technology.
I was inspired to build this because one day I was playing around with my LEGOs when I suddenly realized there has never been a Big Hero 6 set and immediately got to work. I worked for hours to perfect him and I believe he is finished. This model took about four or five hours and stands over seven inches tall. All limbs are movable!
I believe this would make a fabulous LEGO set, because Baymax is an incredible character and deserves his own set. It would also be nice to finally see a Big Hero 6 set!

By Bricks Of Glory
30 comments