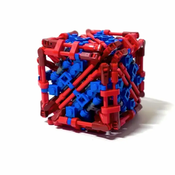 By MSAwesome
17 comments
Launch your builds all day long! I made this car launcher because I really wanted to see my small cars moving well on their own. I experimented with many types of launching mechanisms, and the one that worked the best was the Lego Technic Air Pump. That was not originally made for launching cars this small. I also wanted it to be versatile, so I made it able to launch any car 4 studs wide. Certainly, it can be modified for 6 stud cars! Finally, I tried to go for an overpowered rocket engine look in the launcher while sort of mixing it with a drag racing feel. I designed the included car to look very much like an Formula-1 race car. I really think that this will bring hours of fun to anyone who needs to have their car launched!
Comes with:
One Pump
One Launcher
One Race car