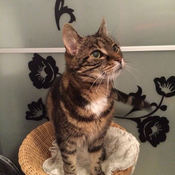 Hi Fans of the Three Investigators,
I'm such a fan of the "Three Investigators" as you are, therefore I created the headquarter of Jupiter, Peter and Bob which is located at Titus Jonas Junkjard.
I decided to built the caravan without the junk lying around (as in the 2nd part of the stories) as I want to enjoy the model every time I look at it.
The caravan comes with the trapdoor under the carpet, the skylight with a ladder, the fences with the secret entrances, the periscope, the laboratory and more.
When you remove the roof you can look inside the caravan and join Bob in his dark room or analysing evidences. You can also watch Jupiter sitting in front of his computer, using the phone or eating Pizza (a hot one is currenty in the oven). Meanwhile Peter is relaxing after a hard sport session on the couch and chatting with Kelly on his mobile phone. When you listen closely you can hear Blacky or the "talking Skull".
As our guys are currently running the important investigation of the "new and fancy Lego headquarter" they are struggeling to clean up their caravan and therefore a lot of stuff is lying around like pizza boxes, dirty dishes, some letters etc.
The wooden fences have two different graffities on them. One with a sinking ship with a dolphin and the other one with the buring city watched by a dog. Both fences are described in the books and I used stickers to recrate the images.
I tried to be as close to the desciption as possible and used a lot of small details.
The headquarter contains of about a 1.000 pieces and can be removed from the display/plate. This can be seen in the last picture which Jupiter, Peter and Bob (from left to right) on their bikes.
I hope you enjoy my model of the headquarter, have fun and follow the guys in their old and new adventures.