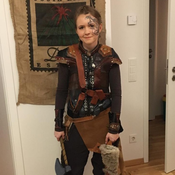 By Marielle4
30 comments
Check out the Story of the great Adventure here:
Are you ready for 24 days of Adventure and mysterie? The Escape Advent calender is a Castle with 24 Stations e.g.loocked Rooms, a boat, a treasure in an underwater cave and a Tower. Each day you have to find hidden hints and items to solve the riddles. Some rooms are locked with a combination lock that can only be opened if you solved the riddles properly to get the right combination of numbers. The main quest is to find all the hints you Need to open the last combination lock of the top floor of the Tower.
I built the Castle last year as a gift for my brother and his girlfriend as a advent calender (check out the videolink to learn more of the Story). The Story was , that his three Sisters where caught in the Tower, so he and his girlfriend had to rescue them.
Regarding the growing popularity of Escape games all over the world, I think an Escape game combined with a lego model as an advent calender could be a great succes as a lego set. It would be a great adventure for the whole Family to discover and explore the secrets and mysteries of the castle, finding hidden places and solve all different kinds of riddles over the period of 24 days.
It would also be possible to make one set with riddles for children and one set with riddles for adults.