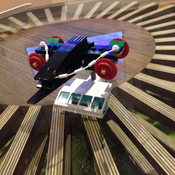 This is a lego made for new and old creators to remake the old lego castle. So if you once had one of those i think you would like this set because instead of the evil wizard or the king this is the lego of one of the bandits who managed to steal gold from the castle and escape.

Story: Once upon a time on a castle the king ruled undefeated by the evil wizard but since he had so much guards the bandits would not try to steal the gold. But one day a new bandit came along and his name was john strange decided he would steal from the castle and so he did but was shortly noticed by a guard. After running for an hour the guards lost him and when returning to the hideout with the loot and was shortly named king of the bandits. But also most wanted in the kingdom. Strange assembled an army but was shortly captured because one decided to knockout all the guards and got them all captured an strange had to go save them.